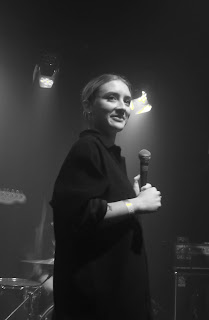 Odmansbox (7.6/10) were an odd addition to the bill supporting FRIGS but no less enjoyable. A three piece prog-pop group that fit in somewhere between Mat Berry's Prog rock revivalism and Jermaine Clement's various Bowie pastiches. Odmansbox have a dry sense of humour that shines through in their songs and stage presence, from their tributes/laments of hippie culture and the Sparks-ish 'Who the fuck are you', Odmansbox manage to write music that is both very clever and very catchy. Mutes (7.6) have changed a lot since their inception as a bedroom post-rock project. Their singer James has brought some of the charged rock n' roll sound of his other band God Damn and has turned Mutes into his own rock trio. Mutes are now much more Cribs than Mogwai yet the shoegazy sound of their earlier releases still occasionally pops through into their live performances. Best of all was the krautrock style closer for their set that seemed to last forever, mixing motorik drums with a mess of distorted guitar noise made for a thrilling end to their set. 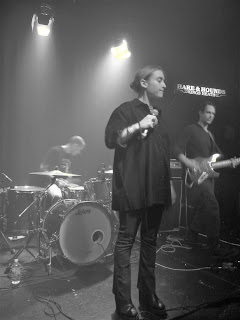 FRIGS (8) have been compared to legends such as Sonic Youth and PJ Harvey, yet while well intentioned these comparisons seem rather lazy. The band that FRIGS most closely resemble is their fellow Canadians and friends Preoccupations. I feel that they also should draw comparison to other post-punk revivalists such as Protomartyr or Savages. Whatever the case FRIGS make the kind of dark, claustrophobic post-punk that I'm a sucker for. Any mix of growled vocals, propulsive drums, rumbling bass and wiry guitar leads is likely to win me over and FRIGS are one of the best bands I've come across who are likely doing this. A big part of what makes their live shows so thrilling is their singer Bria. Bria is a confrontational singer, who was eager to get right into peoples faces. Here raspy vocals were distorted past being understandable, which only added to the sinister edge of the music. She did little to engage the audience despite the occasional shout of 'Birmingham!' but the slight detachment between crowd and band worked to their favour. Overall this was a pretty fantastic show from a band who deserve to stand out amongst their peers.
Posted by Beat Town Blog at 9:11 AM